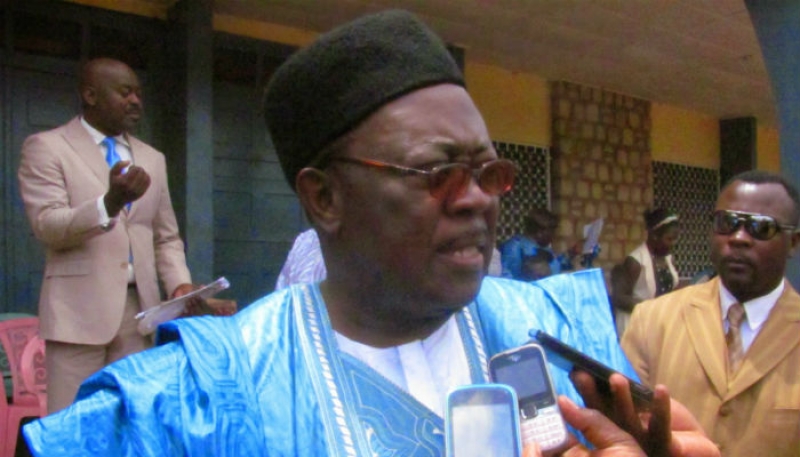 Simon Fobi Nchinda, Député SDF Archives
Hon Fobi Nchinda Simon, SDF Member of Parliament for Bamenda/Bali Constituency has said after offering the services of Ni John Fru Ndi, National Chairman of the Social Democratic Front (SDF) party to mediate an end to the on-going crisis in Cameroon’s North West and South West Regions, the belligerents must now agree to a ceasefire and release prisoners of war before negotiations and dialogue can proceed.

The lawmaker says an all-inclusive dialogue will welcome all shades of opinions as well as individuals who hold same. He insists that no elections should be organised in the country until such a time when peace returns. Read on:-

How realistic are the four points raised by the SDF?

We raised four points all of which we think are realistic. The first point we raised had to do with an immediate bilateral ceasefire. As you know, there is a genocide going on in the North West and South West regions and the entire country is suffering very seriously as a result of no peace, no security in these two regions. So we do not see any discussion for peace taking place unless the guns stop so it is a necessary condition.

The second point had to do with the liberation of all prisoners of war. Nobody can sit down and talk peace with you when their people are in jail. I think that the release of these prisoners of war will make the discussion conducive.

Thirdly, as far as the debate itself is concerned, there are three issues involved; the first is that a mediator, facilitator must be appointed. That is necessary because there is a lot of preparation that must be done. For the actual debate to take place, the mediator or facilitator must go round and meet all the people first and get them agree that they are coming on a particular date and they give you the ideas that they might want to discuss so that, the debate can be structured.

Secondly, independent observers must also be appointed so that from the ceasefire they will be able to follow up both parties to respect the ceasefire all the time until the peace is settled. The SDF has proposed the services of our National Chairman for the post of mediator and we think that he has the necessary credentials to succeed in the task. We can still remember vividly how he brokered peace among the arabshouer-kotoko in the North and in not too far away Bafanji. Ni John Fru Ndi has a record of a peace broker and he is a brave man who has no fear and above all, he is someone who loves the country so that he cannot be intimidated by any side.

Once that is done on the time of negotiation, we are insisting that the debate be a structured one because we know that Cameroon has had experiencing of what they called large debate or “grand debat” or through twitter as we have seen them do. We should talk to each others as brothers and sisters with each one putting his or her points in view of getting a greater country in peace.

And the fourth condition we talked about was that no elections take place before the restoration of peace in the North West and South West regions. One scandal we lived was during the presidential election when we know there was no election in these two regions. The security and peace conditions are such that there was no presidential election and we have reasons to believe that there will be no election if the problems at hand are not solved in these areas.

At the end, we reminded the government that time was not in our favour because the genocide is accelerating at a higher speed and if the government cannot stop it, the international community will come in on the basis of protecting the people and the obligation to stop the genocide.

Given that Sisiku Julius Ayuk Tabe through his lawyer is rejecting Fru Ndi as mediator arguing that SDF’s position is already known by all, what will you people do now?

First, we all know that a mediator must be acceptable by both sides in a conflict. If one side refuses a mediator, you cannot force him on them. Secondly, let me remind the lawyer of Sisiku that on the other hand is Biya, who cannot also serve as a mediator nor his Prime Minister especially as he was an agent of La Republique in the case that took place in Banjul. So, we agree with him, if that is the case, let’s look for someone who can be acceptable by both sides.

First and foremost, it should have begun 57 years ago. After the ruling in Banjul, the Banjul court in Gambia obliged Cameroon and gave 180 days for the government to hold the talks, these talks should have thus begun 10 years ago. After that the African Union met in Libya and validated the judgement of the Banjul court and even put the African Union Commission at the disposal of Mr Biya for the negotiation, the regime still wasted such an opportunity. As you can see, it could have begun long time ago, we are late on it.

As someone who already knows how the regime functions, don’t you think those four points raised will rather be a stumbling block on the path to dialogue?

Well we think that the first thing to do right now is to appoint a mediator and once that is done, the process is already put in place. He will immediately get to work setting the date with the two sides on the ceasefire. If he says, on the 18th of May 2019 for instance at exactly midnight, we want a ceasefire; both sides must be declaring the same thing. Observers will be there to observe that the ceasefire has effectively begun. As you can see, a mediator is the first person to be appointed and if that is not done, everybody will note that you are the one unfortunately delaying the peace process. And if you delay the peace process, you are directly opening the door to the international community to come in on grounds of protecting lives and preventing genocide.

Now that government is excluding secession on the dialogue table, what types of topics are we expecting to see?

The SDF has asked for dialogue that has no conditions. It is for the mediator to draw up the calendar and draw up issues for the contending parties. Each party will give the lists of what they will like to see feature on the discussion table. It is not something that will take one day but once the ceasefire is operational and the observers are in place you can take the time now to negotiate. And because there is peace and security, schools can be going on at the same time with negotiations.

And lastly, Hon Fobi, has the SDF changed its position as regard boycotting or stopping upcoming elections within the present dispensation?

SDF’s position as we advised the Prime Minister Dion Ngute is that it does not make sense to go in for an election when there is no peace and no security. We repeat that presidential election never took place in the North West and South West regions. Why go on to do something that is very stupid given that about 80% of ELECAM staff and even some administrative officials have fled these regions because of insecurity. Who then will run or secure elections in such areas? Who is fooling who?