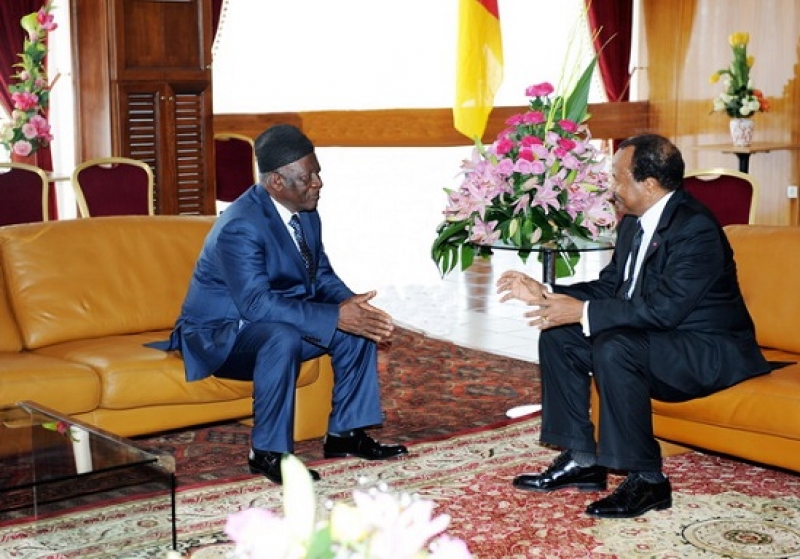 Paul Biya en audience avec John Fru Ndi archives
Meeting in Yaoundé on the 8th and 9th of June 2019, the National Executive Committee of the opposition Social Democratic Front (SDF) party has resolved that President Paul Biya should make way after failing to address the problems rocking the country for close to 37 years. They cite the crisis rocking the country’s North West and South West Regions and a steady erosion of Cameroon’s economic structures under the weight of poor maintenance.

At the end of the deliberations chaired by the SDF National Chairman, Ni John Fru Ndi, the delegates at the meeting agreed that it is time for a transitional government to rescue Cameroon from the stranglehold of bad governance.

“…The National Executive Committee asks for a transitional government to be put in place to resolve this civil war that is wrecking the foundation of the nation, since the Biya regime has clearly shown that it is part of the problem for which we hold him entirely responsible,” the SDF resolved.

The 29-year-old party “warns that the Anglophone crisis is too serious to be diluted with problems related to other state issues or confused with ethnic demands.”

The SDF frowns at the “Biya government’s campaign to chase away all foreign intervention in Cameroon and reminds Cameroon’s friends of their obligation to prevent and protect the people against genocide in the Anglophone regions of our country.”

The party reminds those who are pushing for the use of the state apparatus to exterminate a whole people in the North West and South West Regions that they will all be held accountable for the state crimes and genocide committed in the Anglophone zone.

The National Executive Committee “takes note that the Prime Minister’s visit to the North West and South West Regions has escalated the civil war as seen in the killings in Mankon, Wum and the gruesome shooting to death of a four-month-old baby in Muyuka, the continuous burning of villages, among many other atrocities.”

The SDF says government should bring the crisis to an end before any elections are organised. It also reiterated her offer for the services of its National Chairman, Ni John Fru Ndi to be solicited to negotiate a ceasefire in the “civil war” in the North West and South West Regions to pave the way for an all-inclusive dialogue on the Anglophone problem.

The SDF thanks the international community for her concern and calls on them to intensify humanitarian relief efforts.

In another development, the SDF frowns at the fire incident at the National Refining Company (SONARA) “which illustrates clearly how poor maintenance and the use of obsolete equipment has destroyed many state run companies like Camair, Camrail, WADA, CELUCAM, NPMB among many others.”

The SDF stresses that the incident at SONARA is a clear indication of the problems of bad governance that they have decried for over the years.

The party founded by Ni John Fru Ndi on May 26, 1990 call on the Minister of Secondary Education to see to it those candidates who missed official exams because of confusion on the date of the Ramadan feast should be given a catch up session.