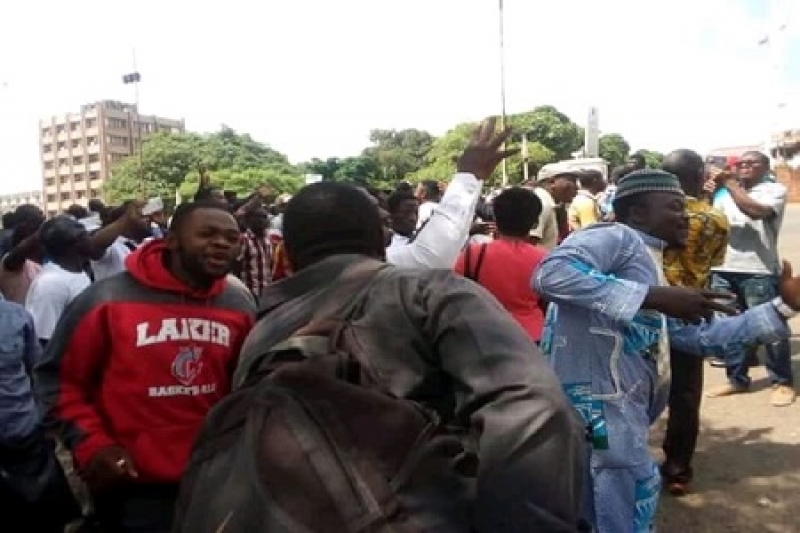 Des militants du MRC devant la Cour d'Appel du Centre getty images
The Mfoundi High Court sitting in Yaoundé has thrown out a suit filed against the decision of the Minister of Territorial Administration banning all activities organized by the Cameroon Renaissance Movement (CRM) from April 6 to April 13, 2019.
The matter pitting the Cameroon Renaissance Movement (CRM) of detained Professor Maurice Kamo and the Minister of Territorial Administration opened on Tuesday, April 16, 2019 and continued on Wednesday, April 17, 2019 following the absence of the MINAT boss. When the matter resumed yesterday, the Minister of Territorial Administration, Atanga Nji Paul was represented by the Head of Division for Judicial Affairs at the Ministry of Territorial Administration. In their submissions before the court, the CRM demanded the annulation of an April 5, 2019 communiqué signed by Minister Atanga Nji prohibiting all public meetings and protests organized by the CRM from April 6 to April 13, 2019. CRM lawyers argued that Minister Atanga Nji lacked competence, violated form and the law when he signed the communiqué. They evoked the provisions of Law no. 055/90 of 19 December 1990 giving competence to ban declared public protests and gatherings to Divisional Officers (Sub-Prefects) who according to article 8 of the said law must sign an order prohibiting the public demonstrations thereof. CRM lawyers said if the protests were going to obstruct public peace, like the Minister claimed, the Sub-prefect should have explored other measures as stated in the law, either by changing the itinerary, provide an alternative itinerary or ban the demonstrations as a last resort. MINAT lawyers rubbished the CRM demands, stating that the request should be declared not receivable by the court bearing on the fact that the period April 6 to April 13, 2019 had long passed. After back and forth arguments with CRM lawyers describing the April 5 Atanga Nji communiqué as an ambush on Kamto’s party, the President of the Mfoundi High Court ruled four hours after that the CRM request is “irrelevant”. CRM supporters describe the judgment as “a true denial of justice”. They wonder why a court seized before the date of the demonstrations, chooses to decide after the date planned for the demonstrations to declare that the request for cancellation of the prohibition act is now irrelevant. The CRM seized the Administrative Courts on April 9 in Douala and April 10 in Yaoundé to reverse the April 5 decision of the Minister of Territorial Administration banning nationwide protests the opposition political party had envisaged from April 6 to April 13, 2019. Yakouba Mamadou, First Vice President of the CRM party said in a statement that instead of going frontal on the Yaoundé regime, they have decided to seek legal redress to overturn Minister Atanga Nji Paul’s decision. He went on to suspend an April 13 nationwide protest initially planned by the party. It is not known what next step Kamto’s party will take, given that Yakouba Mamadou had called on CRM militants to remain mobilized and vigilant especially against those who are organizing a coup against democracy, peace and stability of Cameroon. Meantime, it should be recalled that the Minister of Territorial Administration Atanga Nji Paul had threatened to apply on the CRM the dispositions of Law no. 90/56 of 19 December 1990 which gives him the power to suspend or ban a political party should he be left with no other choice.
Auteur:
Atia T. AZOHNWI
[email protected]
@T_B_D
Tweet
Facebook
0 COMMENTAIRE