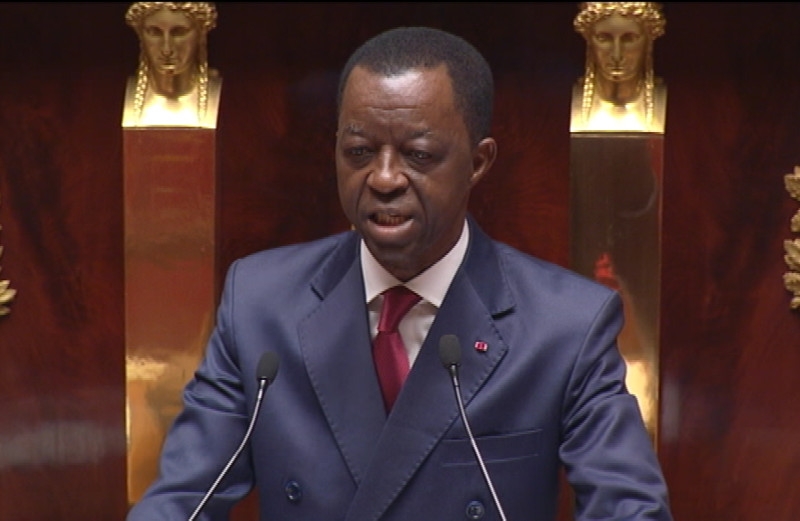 Roger Nkodo Dang, Président du Parlement panafricain Archives
The President of the  Pan-African Parliament, Hon. Roger Nkodo Dang has blasted the European Parliament for embarking on “a smear campaign” against “the sovereign state” of Cameroon when they released resolution 2019/2691(RSP) of April 18, 2019 in relation to the socio-political climate in the country’s North West and South West Regions.

Nkodo Dang told reporters in Yaoundé today Thursday, May 23, 2019 that the resolution is a breach of a memorandum of understanding that exists between the Pan-African Parliament and the European Parliament.

His remarks came shortly after an audience with the speaker of Cameroon’s National Assembly, Hon. Cavayé Yéguié Djibril.

The President of the Pan-African Parliament used the opportunity to hand to Hon. Cavaye an invitation to attend a forthcoming summit on AIDS and health financing scheduled for Brazzaville this year.

Without stating what provision or the specific memorandum the European Parliament breached, Nkodo Dang simply went in the line of the likes of Senate President, Marcel Niat Njifenji.

Niat had in reacting to the European Parliament resolution on Cameroon said: “The State of Cameroon, deeply attached to its territorial integrity and its unitary and decentralized status, has through its Government spared no effort in providing ideal solutions to the problems faced in the North West and South West Regions ever since the tabling of the unionist and corporatist claims.”

He added that: “the State of Cameroon, open to dialogue, has always taken into account the complaints of all social classes, and provided the appropriate responses.” But Niat failed to state how, when and with whom such dialogue took place and why with all the measures so taken, the crisis remains unending.

“The State of Cameroon has a legislative and parliamentary corpus in compliance with international treaties and agreements. Therefore, and like all other States, it seeks to ensure their respect by all Cameroonian citizens,” Niat added, as if to justify why all those considered political detainees by the European Parliament will not be freed as recommended by the EU legislators.

The resolution on Cameroon had condemned the 2014 anti-terrorism law. “[The European Parliament] expresses concern that the 2014 anti-terrorism law is being misused to restrict fundamental freedoms; supports the requests made by UN experts that the law be reviewed to ensure that it is not used to restrict the rights to freedom of expression, peaceful assembly and association,” the EU MPs had said.

Among others, it had also deplored the violence and discrimination facing the Anglophone community; expressed particular concern over allegations that Government forces are responsible for killings, excessive use of force, and torture; and called on the Government to immediately take all steps to bring an end to the violence and impunity in the country.

The legislative body of the EU also noted with concern the deteriorating situation for internally displaced people; calls in particular for immediate measures by the Government of Cameroon and the international community to protect the security, safety and unhindered access to healthcare and education for children.

It deeply regrets the repressive climate in Cameroon facing opposition parties and supporters, civil society and citizen movements; condemns the arrest and detention of Maurice Kamto and other peaceful protesters; recalls that civilians should not be tried in military courts; calls on the Cameroonian authorities to release Maurice Kamto and the protesters immediately and drop all politically-motivated charges; further calls on the Government of Cameroon to cease all harassment and intimidation of political activists, including the ban on peaceful political gatherings, demonstrations and protests, and to take action to clamp down on instances of hate speech.