Cameroon: Jean de Dieu Momo: “The people of the North West and South West Regions have taken up arms. Does that stop me from drinking my palm wine?” 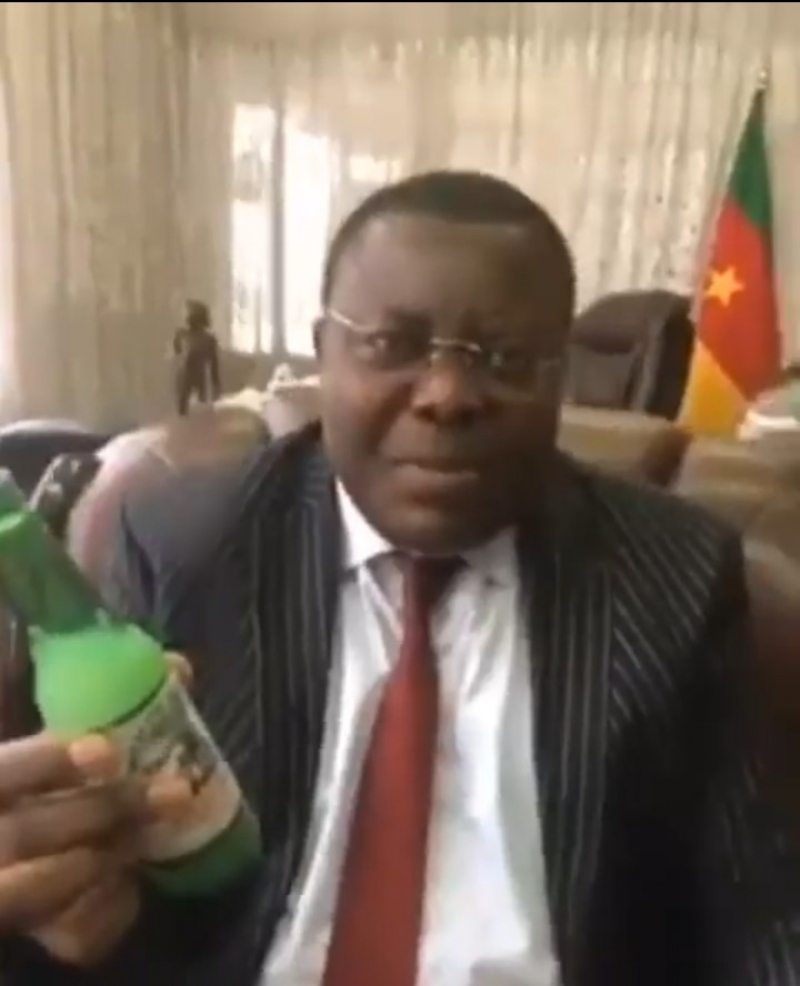 Minister Momo with a bottle of Palm Wine Facebook
Jean de Dieu Momo, Minister Delegate to the Minister of Justice, Keeper of the Seals has pulled another stunt, making startling remarks about the crisis in Cameroon’s North West and South West Regions.

In a video that has since gone viral on social media, the Knight of the Cameroon Order of Valour and National President of PADDEC (Patriotes Democrates pour le Developpement du Cameroun) laughs at the plight of the suffering masses in the North West and South West regions as he drinks from a bottle of palm wine.

Apparently addressing a gathering of his admirers in his Yaoundé office, Momo said: “The people of the North West and South West Regions have taken up arms. Does that stop me from drinking my palm wine?”

The Minister Delegate said when the Bamileke’s were fighting among themselves in 1960; it did not stop him from living peacefully in Douala. Similarly, he says Anglophones who have taken up arms in the North West and South West regions do not prevent him from drinking his palm wine in Yaoundé.

Momo says they “the real Bamilekes” have today refused to follow “the mad people” and “Maquisards” who went marching in Paris and asking the masses to take up arms against the regime. He declared his support for the “indomitable patriots” and wishes that such patriotic groups multiply to fight the enemies of the state who are largely illegal immigrants and asylum seekers abroad.

In the viral video, Minister Momo says the Maquisards and Ambazonians are just the same. He says the likes of Brice Nicheu and Patrice Nganang who are leading anti-regime protests in the diaspora are children of the maquisards of yesterday.

He says those who stage protests in Paris should not only walk, but should run, though in either case, Cameroon remains unmoved. He qualified those in the “anti-sadinard” movement as immigrants who used fake warrants of arrests and prison release papers to get political asylum and can no longer return to Cameroon as long as the present regime is in place.

Jean De Dieu Momo had in March 2019 received blessings from the traditional ruler of Esu in the North West region and on the occasion, he pledged to find a lasting solution to the Anglophone crisis. Many have now been taken aback by his recent utterances.