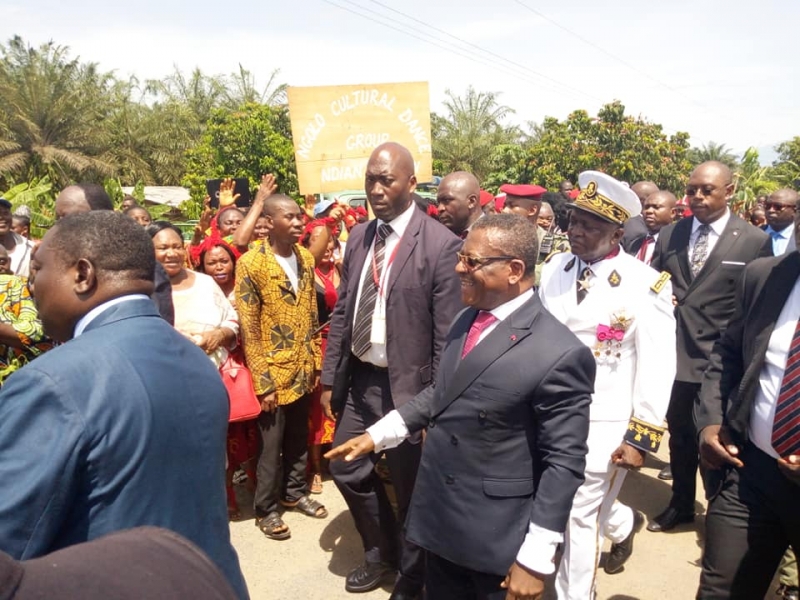 Dion Ngute’s convoy crossed the Mungo Bridge into the South West Region at exactly 11:00am. Governor Okalia Bilai Bernard gave him the first welcome handshake before other officials followed amidst chants of joy and ululations from the many dance and socio-cultural groups that had honoured the appointment with history.

The traditional rulers of the South West Region conducted the PM into a traditional hut along the banks of the Mungo River, constructed for the occasion. There, Dion Ngute was clad in traditional regalia befitting of his rank and prerogatives as Prime Minister, Head of Government and Traditional Ruler of the region.

When they emerged from the traditional hut, the PM and his peers – traditional rulers performed a rite at the banks of the river before hitting the road to Buea. The course of his convoy was lined up by an enthusiastic population who hunger for a return to peace.

He called on all in the bushes to drop their weapons and come to the dialogue table. PM Dion Ngute said the situation in these two regions has spared no one, and it is therefore time to give peace a chance.

This Tuesday, PM Dion Ngute will hold a one-hour working session with administrative and security officials from 2:00pm, administrative authorities, heads of security services, local and external elite of the South West, Mayors, Government Delegates, Members of the National Assembly, and Senators will take turns to meet the PM.

On Wednesday, leaders of legalised political parties will individually be received by the PM. Traditional Authorities and then Religious Authorities will hold talks with the Head of Government in two separate audiences before he leaves for Limbe where he will hold similar audiences and handover fishing materials.

He will leave Buea for Kumba in Meme Division on Thursday where he is expected to preach the gospel of peace before returning to Buea same day.

The Prime Minister will end his visit to the South West Region on Friday, May 17, 2019 after he would have had heart-to-heart discussions with the people of the region.