Cameroon – Prime Minister on Peace Mission To South West: “No more violence. Enough is enough. I come on behalf of President Biya to invite you to the dialogue and reconciliation table” 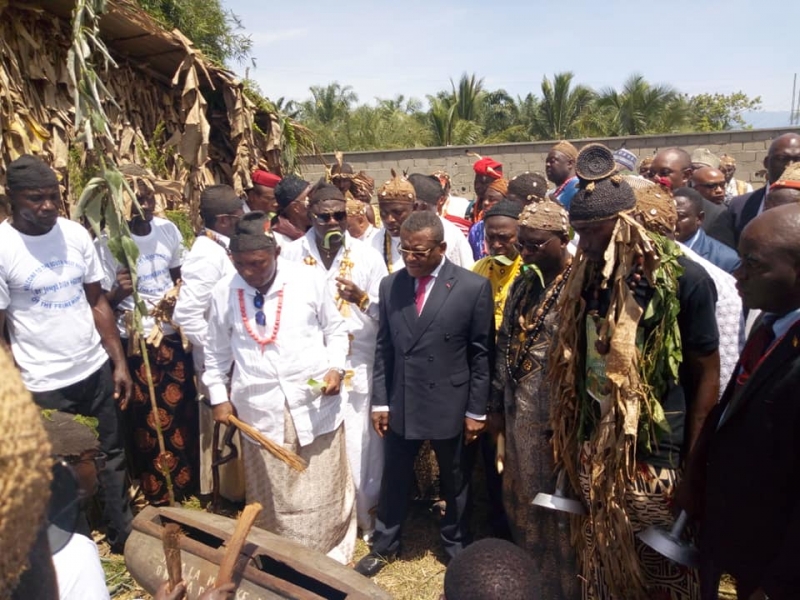 Traditional Rulers reserved a surprise for the PM Atia Azohnwi
On day one of his five-day peace mission to the restive South West region Tuesday, Cameroon’s Prime Minister, Head of Government Dion Ngute Joseph invited the people to the dialogue and reconciliation table on behalf of his master, President Paul Biya. He called on armed men to heed to the president’s “virtual amnesty”, drop their arms and be reintegrated into society.

“Let us unite for peace. Cameroon is greater than our differences. Stop violence. Let's sit down and have a constructive dialogue. Ohh my people, rise up! It's time for peace. No more violence. Enough is enough. I come on behalf of President Paul Biya to invite you to the dialogue and reconciliation table,” the PM said.

Addressing youths in the region represented by the Cameroon National Youth Council, the Prime Minister said they should talk to their peers in the bushes to drop their arms and seize the olive branch being extended to them by the President of the Republic.

“This crisis is your crisis. I am counting on you, youth, to talk to these people who are in the bushes. The Head of State President Paul Biya has already granted them a virtual amnesty. So why do they still stay there?” PM Dion Ngute asked the representatives of the South West Chapter of the Cameroon National Youth Council.

The audience with the youth followed a working session with Administrative and Security Officers in the South West. He would later receive municipal officials before exchanging views with the elites, including Parliamentarians and Traditional Rulers. He urged each of them to act with determination to put an end to this crisis that has lasted too long.

The PM’s convoy was stopped upon arrival in Buea by a group of whaling women of the North West/South West Women's Task Force, SNWOT. The women demanded an end to the prolonged crisis especially given that they are the hardest hit, having to bury their husbands and children. “We need peace!” they cried out.

Responding to the women in the local lingua franca – pidgin, Prime Minister Dion Ngute said everything that begins has an end.

His words: “I am here on a peace mission on the instructions of President Paul Biya. He sent me to talk to all of you and all our children that everything must have an end. President Biya says all the meetings that you have been clamouring for will be organised. The children should not stay in the bushes anymore. They should come out of the bushes so we can be as we were before. Let schools resume. This September, all the children must go to school. That is the message from President Paul Biya. He says all the children in the bushes belong to women. We do not want any child in the bushes to die again. We want them to leave the bushes and hand their guns. President Biya says they will be well taken care of.”