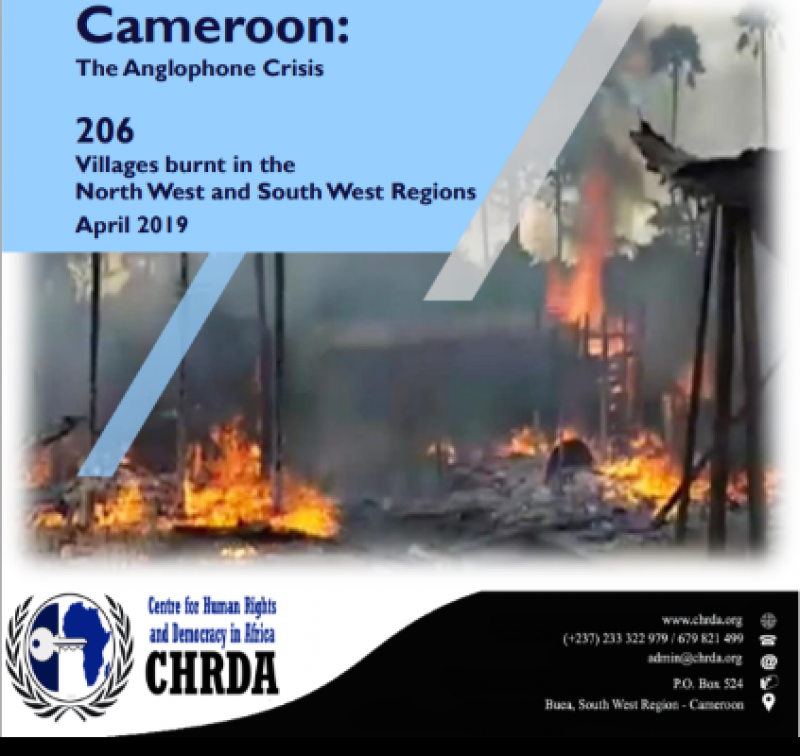 The report however does not carry the May arson in Mankon where the localities of Alachu, Matsam and Muwatsu were torched as soldiers battle armed men fighting for the restoration of a country they call Ambazonia. Both parties have denied involvement in the arson, with Cameroon's defense forces getting the most of the blame.

"To the dismay of the national, regional and international communities, the Cameroon government began arresting activists and leaders

"Internet was shut down for three months and all forms of dissent were stifled, forcing  hundreds into exile.

"In August 2017, President Paul Biya of Cameroon ordered the release of several detainees, but avoided dialogue, prompting mass protests in September 2017 with an estimated 500,000 people on the streets of various cities, towns and villages. "The government’s response was a brutal crackdown which led to a declaration of independence on October 1, 2017.

"While approximately 900,000 unarmed protesters were celebrating this declaration, government troops shot at thousands with automatic rifles and helicopters.

"This marked the start of military attacks upon villages. A government official asked his citizens to evacuate their village causing mass exodus

of villagers into Nigeria. Other villages followed suit, and today, we estimate that there are more than 50,000 refugees and 500,000 internally displaced persons. The civilians in response started an armed campaign to defend their villages and homes, leading to full-blown armed insurgency.

"In what the Head of State has referred to as ‘neutralizing’ and ‘eradicating’ the armed fighters, many villages have been raided and partially or severely burnt down by state defense forces. The citizens of some villages live in fear. They no longer see the military as a force of peace.

"It is on this note that CHRDA, with its main objectives to promote the respect of human rights and democratic principles within our society, denounces such inhumane acts by the Cameroon military.

"CHRDA urges both parties in this conflict to conduct a ceasefire and engage in an inclusive dialogue so that justice can reign supreme while giving chance to peace."

Human Rights Lawyer Agbor Nkongho says: “This act of burning villages is in breach of classical common article 3 to the Four Geneva Convention 1949 and the Additional Protocol II  to the same Convention dealing with the non- international conflicts. Also, the burning of villages is in breach of national and international human rights norms and the host of other laws.”

Jan Egeland, Secretary General of the Norwegian Refugee Council had described the events in Anglophone Cameroon as an emergency.

His words: “When brutal fighting displaces  hundreds of thousands of civilians, it usually sets international alarm bells ringing. But, the shocking unmet needs of tens of thousands of people  fleeing violence in South West and North West Cameroon has resulted in no systematic mediation efforts, no large relief programme, little media interest and too little pressure on the parties to stop attacking civilians.”