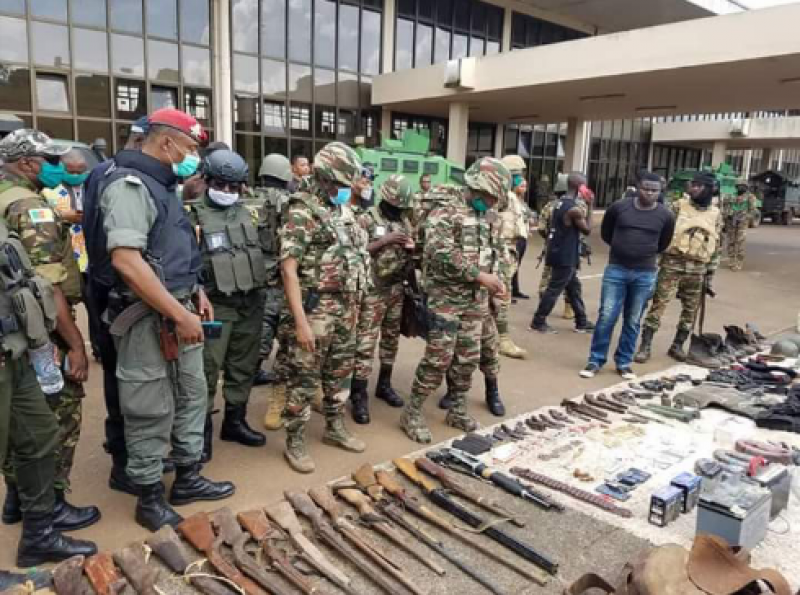 Soldiers take stock after special operation in Bafut Facebook
Dozens of armed separatist fighters are reported to have been killed in Bafut following a special operation carried out by elements of Cameroon’s Defense and Security Forces this week.

The commander of the special operation, Colonel Matiang Charles Alain and his no fewer than 300 elements drawn from other detachments of the military including the 501 Air Force Base and the Motorized Infantry Brigade, swept through Bafut for six days from the night of Saturday, April 25, 2020.

From Sop, Mankwi, to Manka Nikong through to Nsani and then Agyati and beyond, the defence forces “neutralised” scores of separatist fights including the notorious “general” Alhadji and “general” Peace Plant. Open sources suggest at least 53 separatists were killed in the operation. Separatist general Alhadji is known to have masterminded the kidnapping on November 5, 2018 of 79 students, the principal and three staff members from the Presbyterian Secondary School (PSS) Nkwen.

Operation Free Bafut also led to the recovery of the Saddle Hill Ranch, a luxury hotel resort that had been transformed into an operational base for armed separatist fighters grouped under the name “Bafut Seven Katta Defense Force”. Assorted weaponry was also recovered along with motorbikes, a Toyota Fortuner SUV and two horses.

At the Bamenda Airport Friday, the Commander of the 5th Joint Military Region, Brigadier General Nka Valère thanked Colonel Matiang and the soldiers who led the operation. With only one soldier wounded in the operation, Brigadier General Nka said it was a job well done. He went on to convey the gratitude of the President of the Republic, Commander-in-Chief of the Defense Forces, H.E. Paul Biya as well as that of the Minister Delegate at the Presidency of the Republic in charge of Defense and the Army Chief of Staff for the soldiers’ exceptional professionalism.

Speaking Friday, the Generals said the operation to liberate Bafut from the activities of armed separatists is part of their mission to protect the population and secure their property.

General Nka regretted that the population have had to live under fear of reprisals from the “terrorists” and that the locals continue to suffer from harassment and extortion through kidnappings among other atrocious activities perpetuated by armed separatists.

Generals Nka and Ekongwese note that they took over command of the 5th region at a time Bafut had been declared a no-go-zone but the military is slowly clearing Bafut and will not stop until the whole of Bafut is returned to normalcy.  The Saddle Hill Ranch will thus be requisitioned so troops can be stationed there to secure the area and the property.