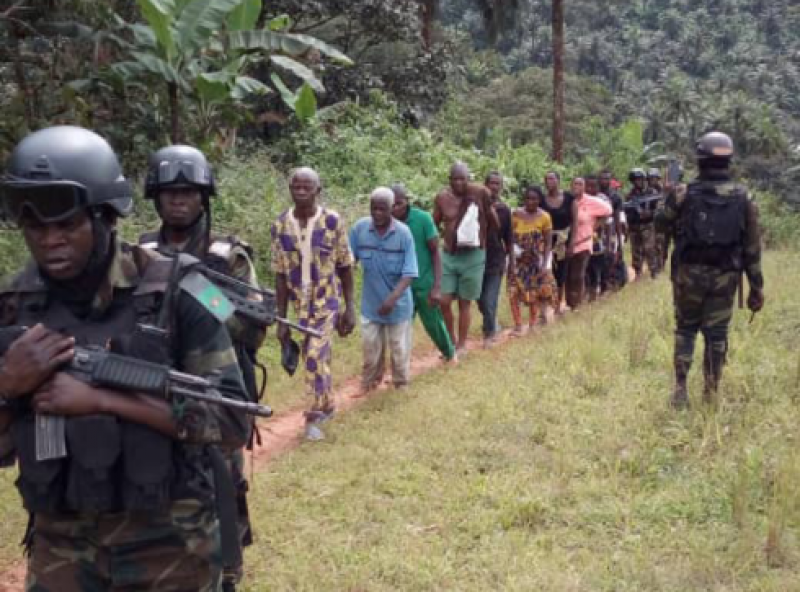 Ex-hostages being led to safety by security forces Facebook
The Rapid Intervention Battalion, BIR, an elite unit of Cameroon’s military has ramped up operations in Lebialem, freeing no fewer than 11 hostages from separatist captivity over the weekend.

Friday’s operation to free the hostages came after the killing of rebel strongman, Ayekeh Lestico alias “General Ayekeh” on Tuesday by a BIR squad commanded by Colonel Maidoang Desire.

While twenty captives were liberated on Tuesday, eleven more were only freed on Friday. They were being held in terrible conditions in a terrorist camp belonging to Agbor Oscar Nkeng aka “General Die Man”.

Agbor Oscar is said to have narrowly cheated death during the operation that neutralized Ayekeh Lestico. Open military sources suggest that the rebel, General Die Man may be nursing injuries sustained from military firepower.

Those freed on Friday brandished scars on their bodies. They say the scars are the results of wounds put on their bodies by the rebels with the use of razor blades.

They were kidnapped from Tali 1 and Tali 2 villages in Upper Banyang subdivision, Manyu Division of Cameroon’s South West region, and taken to Bessali, Wabane Subdivision, Lebialem, where they were rescued.

According to the freed hostages, their ordeal started when they were asked to contribute FCFA 250,000 per quarter and give to the Amba boys for the purchase of arms. But when the locals in Tali 1 and Tali 2 refused to comply, rebels returned and tortured them.

In response, the youths of Tali 1 and Tali 2 captured and tied a certain Commander of the Ambazonian gang, Orock Valentine a.k.a Mbula along with three of his aides.

After Mbula was captured, the Cameroon military was alerted, but unfortunately, because of bad roads to the area, the military did not respond on time. The military only arrived after an intervention from other Amba gangs from Wabane had flooded the place and released Mbula and three others.

“Orock Valentine alias General Mbula came to the village, moved from quarter to quarter saying that each quarter has to contribute 250,000 FCFA to support them buy arms,” the ex-hostages said. “We the quarter heads and councilors and notables asked him ‘who do you want to fight with the guns?’. We refused to give him the money for the guns.”

Days later, the said Rebel General Mbula returned with reinforcement from rebel general Ayekeh (Ayekeh Lestico, now of late) and rebel general Die Man. They said since the villages had called in the military, they would face their wrath.

“They kidnapped us – quarter heads, councilors, notables, and some aged men like myself. They went from door to door and removed us, sealing our mouths and beating us with machetes and guns. They tied us and took us to the home of the regent chief. We met quarter heads that had been stripped naked and put in water and asked to swim like fishes. They took us to Tali 2 where they had tied others in the bushes,” one of the ex-captives said.

He added that: “They took 20 of us to Bessali. They shared us into two groups and sent each group to a detention center they called Kondengui and another they called Prison Centrale.”

Kondengui turned out to be Catholic School Bessali in Wabane. 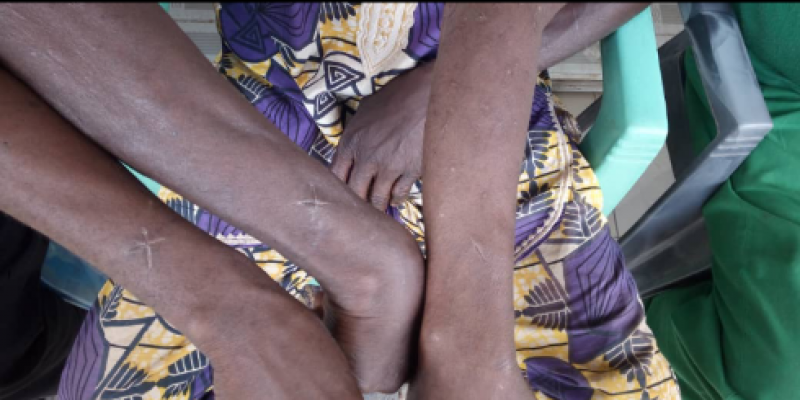 Rebel General Die Man indicted those they had kidnapped for contravening the so-called laws of Ambaland by attempting to kill their Rebel general Mbula and his aides.

The ex-hostages said: “The next day at about noon, General Die Man called us and said we tried killing his general and three soldiers. He said he was going to kill all of us. He called his boys to bring batons. We were ordered to prostrate and were each given 50 strokes.  You can see that my legs and feet are still swollen. All of us suffered like this. We could not walk. We could only creep.

“He said he had asked us to contribute FCFA 250,000 to buy guns but we refused. He said we were each going to buy one gun for them and that one gun costs FCFA 1.6 million. He gave us a three-day deadline. He said if the money does not come, he will kill us. Given that we did not have our phones, we could not make contacts for the money to come.

“Each time he came to see us, he tortured and threatened us. He did not feed us. Good Samaritans like the Pastor of Presbyterian Church, Full Gospel, Apostolic, and some Christians gave us food. Two days ago, he told us that he will kill us on Tuesday morning.

“Thank God the military entered that very night without our knowledge. We woke up in the morning and made our prayers. We started hearing the sound of heavy gunfire. Since Ayekeh was about 18 meters from where we were, we heard the gunshots as though it was coming from the classrooms in which we were being held.

Both groups of ex-hostages have been reunited with their families.