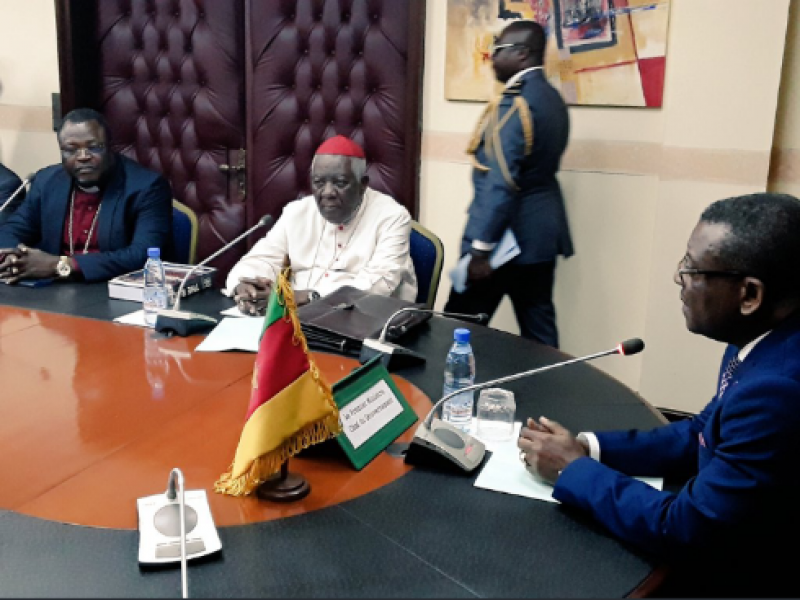 Religious leaders will be at the major national dialogue Twitter
Religious leaders who make up the college of convenors of the Anglophone General Conference have accepted an invitation from Cameroon’s Prime Minister to attend the upcoming Major National Dialogue aimed at finding solutions to the crisis in the North West and South West Regions.

The lead convener, Christian Cardinal Tumi says they desperately want peace to return to Cameroon and will not spare any effort at achieving their goal. He spoke to the press Thursday after submitting a 400-page document to the Head of Government.

“We have summarised everything in the document we have handed to the Prime Minister in two pages. We are aiming at peace. That is our goal. And for that to take place, we think that we should know that it is God who governs us and the world. And that every one of us will render account for his or her actions,” the Cardinal said.

He went on to sound a reminder to all stakeholders who have thrown truth into the dustbin. “We are convinced that during this dialogue, the truth should prevail. By the truth, I mean that whatever everybody will be saying should be in agreement with what he or she is thinking. That is truth. If you are telling somebody something which does not correspond to your thought, you are lying.”

The priest charged all those involved in the dialogue to be open to make concessions for the sake of peace. “So, we must be open to one another and all of us should know that whatever we have to say as far as the political life of our country is concerned is just an opinion. Opinion is an affirmation I hold with the fear that the contradictory opinion of the other may be the right thing to accept,” said the AGC lead convener, furthering that, “Therefore, we should also come into this dialogue with what I call: intellectual honesty. When you are convinced that what the other person is saying is what is good for our nation, you have to bow down.”

“We have handed over two documents to the prime minister. We sent out a questionnaire and about a thousand people reacted over the world and we summarised it so to say in a book that is about 400 pages. But that book is summarised for those who are lazy to read the big one so they can read it in few minutes and have an idea of what is in the more elaborated book.

“We have given all those documents to the Prime Minister. It is left to them to exploit it as they wish. We have been invited to the meeting and we accepted. So, therefore, we are praying as religious leaders that our country should get back the peace she enjoyed because hundreds of thousands of our people are dying and some are suffering in the bushes. Some are dying of hunger, some are dying of sicknesses. This should not continue.”