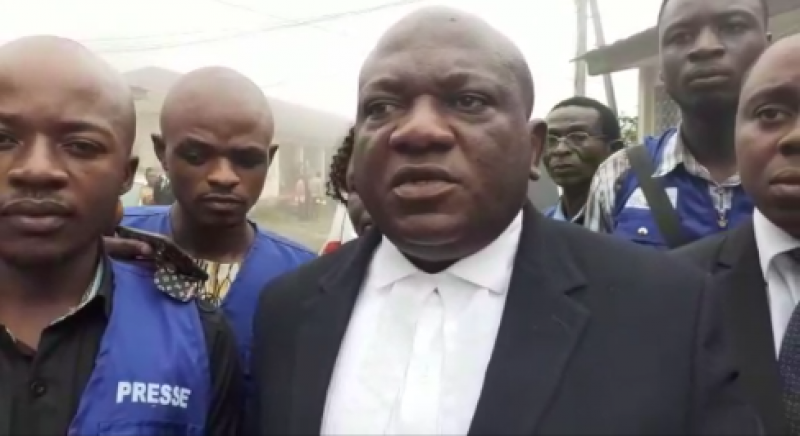 The former Judge at the Special Criminal Court & Gambia Court of Appeal was speaking in Buea Tuesday, November 5, 2019 after the Fako High Court dismissed a Habeas Corpus application filled in favour of Journalist Samuel Wazizi arrested since August 2, 2019.

The Attorney General of the South West Court of Appeal and the Commander of the 21st Motorized Infantry Battalion in Buea were dragged before the President of the Fako High Court as respondents in an application for “Habeas Corpus” Suit No. HCF/HB/002/19 over the whereabouts of pidgin news anchor Samuel Wazizi.

After the ruling, Barrister Emmanuel Nkea said the court’s ruling has demonstrated that the judiciary is not independent, making it difficult to seek accountability.

His words: “We are just coming back from court. The ruling was delivered today and the application was in essence dismissed on two grounds. First, the court argued that the first applicant Barrister Ewule ought not to have been an applicant because he was never arrested and secondly that the Procureur General (Attorney General) was a wrong party to have been listed in the process. But, we hold a different view.

“We found the court’s ruling a little bit awkward in the sense that all the arguments and the case law that we had submitted in court were never taken into consideration in the court’s ruling.  Rather, the court focused more on what the legal department raised without making reference to any argument that we raised or any legal authority that we cited. Some of those authorities were authorities of cases that were decided by the same judge.

“And we feel that matters of this nature give us an opportunity to assess the independence of the judiciary and to see whether or not the judiciary is a power. And we believe that this decision has demonstrated that the judiciary is not. But also, these are means that are meant to stifle or discourage the process of seeking accountability. But we will pursue the matter further. We’re advising ourselves. We will do a repeat application and see what the court will say.”

After many years of rich and diverse experience in legal practice and research; as a Trial Lawyer, Company Secretary, State Counsel, University Law Lecturer, Principal Magistrate, High Court Judge and Justice of Appeal, Barrister NKEA-ALEAMBONG Emmanuel (MRG) has acquired valuable knowledge and skills and is in a good position to use these knowledge and skills to provide crucial advise to litigants from a multi-disciplinary perspective.

With an in-depth experience in qualitative legal analysis and proven ability to develop cooperative working relationships and resilience, Barrister NKEA-ALEAMBONG is team-spirited, and self-motivated; and delivers desired outputs of quality standards within set time frames. He has a history of professional excellence, having emerged as the National overall best candidate of the Cameroon Bar exams in 1999.

Barrister NKEA was called to the Cameroon Bar in 1999, first as a Pupil Lawyer and later in 2001 as an Advocate of the Cameroon Bar and Supreme Court. He is the Founding and Managing Partner of VERITAS LAW OFFICES, Buea, South West Region, Cameroon, established in 2001. He is a highly motivated, experienced and focused lawyer with a multi-jurisdictional and multi-disciplinary experience in legal practice.

He worked as a Trial Lawyer in Cameroon from 1999-2005, and as a Company Secretary in the Gambia from January 2006 to June 2007. He served as State Counsel at the Attorney General Chambers and Ministry of Justice in the Republic of The Gambia from June 2007 to December 2008. He was appointed to the Gambia Bench by the Judicial Service Commission, as Principal (Chief) Magistrate from September 2009 to December 2010. As the Principal Magistrate of Banjul, he concurrently served as the President of the Special Narcotics Court and Chairman of the Industrial Tribunal.

In January, 2011, he was elevated to the Superior Court Bench by His Excellency the President of the Republic of The Gambia, upon the recommendation of the Judicial Service Commission. From 2011 to 2014 he served as the Judge (President) of the Special Criminal Court of The Gambia. In 2013, he was elevated to the Gambia Court of Appeal Bench as Additional Justice of Appeal.

He taught causes in Criminal Procedure, Constitutional Law, Global Legal Systems, and Labour Law at the Faculty of Law, University of The Gambia from February 2010 to February 2014. He was a founding member of the formation team of the Gambia Law School where he taught causes in Legal Systems from 2012 to 2014. At the Gambia Law School, he was also a Member of the Admissions and Academic Board.

He was retained since 2006 as a senior Visiting Law Lecturer on the Commonwealth Recognized Diploma in Law Programme with the Gambia Technical Training Institute; where he taught Business Law, Law of Contract, Company Law, Immigration Law, Law of Evidence, and Constitutional Law. He was also retained since 2007, as a Visiting Lecturer of Business Law at the Management Development Institute (Now School of Public Administration & Management) Gambia. His area of interest includes Constitutional Law, Administrative Law, Company Law, Criminal Law, Human Rights, Immigration Law and Law of Evidence.

With deep interest in strategic public interest litigation, Barrister NKEA-ALEAMBONG has prosecuted several public interest cases before regional and continental treaty bodies as counsel for several entities. In recognition of his works in this regard he was selected in June 2009 as a Fellow of the Public Interest Litigation Institute in New York, USA and was designated as a Visiting Scholar of Columbia University (In the City of New York) USA, in August 2009.