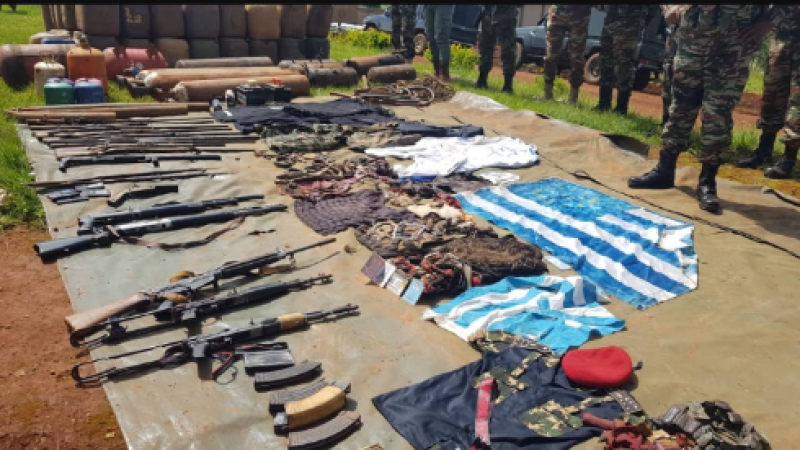 “Operation Clean Kumbo” was led by the Commander of the 51st Motorised Infantry Brigade, Colonel Matiang Charles Alain who had a 300-man troop at his disposal.

Regretting that they lost four valiant soldiers in Operation Clean Kumbo, Colonel Matiang said his troops dislodged several separatist hideouts, killing many armed fighters and injuring others who are on the run, including notorious Amba ‘General’ No Pity.

10 motorbikes, five AK47 riffles, dane guns, charms, gallons of contraband fuel as well as equipment used in manufacturing improvised explosive devices among other items were retrieved from the hideouts of separatists.

With some of the armed fighters like ‘General’ No Pity still on the run, the Commander of the 5th Joint military region called on the troops to stay on alert. He reminded them of the need to remain professional as they fight to weed out separatist fighters in the North West Region.

SDO Lanyuy Harry requested that more vehicles and security personnel be sent to Bui for the protection of the people and their property as the poor state of roads has rendered the existing vehicles bad.

He regretted that economic operators who had started investing in the division had fled after the armed groups made life difficult for them.

“We had institutions of higher learning in addition to the hospital facilities here; that is the Banso Baptist Hospital and Shishong Cardiac Centre. These are jewels we have. This is in addition to the agricultural prowess of the Division. Visitors were trooping here every day, either for education, healthcare, or for purchases. Our humble appeal is for the fighters in the bushes to drop their arms and join the DDR centers. Their place is in this republic,” The Guardian Post quotes the SDO as saying.

The operation to clean Kumbo took the security forces to Verkovi, Mbiame, Ibal, and parts of Nwa in the Donga Mantung division.

During this first phase of the operation, four soldiers were said to have fallen on the battlefront while others injured are being treated in hospitals.

It should be recalled that last month, the convoy of North West Governor came under serious attack with improvised explosives planted along the way. Gunshots also erupted at St. Augustine College as Bishop Nkuo celebrated the 40th anniversary of his Priestly ordination.