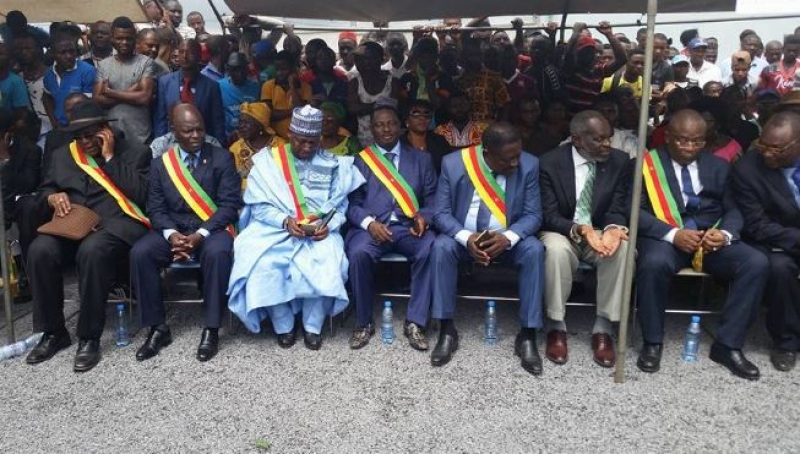 SDF bigwigs in a ceremony in Buea File picture
On May 26, 1990, thousands of SDF 'militants' and sympathizers gathered at Bamenda's Ntarinkon Park to take part in the launching of the Social Democratic Front (SDF) party and a reintroduction of multipartism in defiance of a Government ban.

In his speech, the lion-hearted SDF Chairman, Ni John Fru Ndi, fearlessly lashed out at Cameroon's monolithic and oppressive political system, amidst a suffocating military presence.

Speaking directly to the militants who had braved the threat of repression to be at the party's launching Fru Ndi declared:

“Thank you for your faith and determination. Make no mistake, and don’t allow yourself to be misled and misguided by anyone, no matter his situation in life. Democracy has never been handed on a platter of gold! (…) Let us make it clear to those who are hearing us today that, in the view of the Social Democratic Front, the struggle will continue, not only here, but anywhere in the world, as long as there is somebody who is governing and someone who is governed.”

Within a couple of years of its birth which had been "watered" with the blood of these "six martyrs of democracy”, the SDF had become the most popular party in Cameroon, and its motto "Power to the People", the rallying cry of the oppressed masses of Cameroon.

By the time the SDF and its charismatic chairman challenged President Paul Biya in the October 1992 presidential elections under the banner of the "Union for Change” coalition, the party was already being considered as the most viable alternative to the Biya regime - Fru Ndi's controversial loss to Paul Biya in these elections (generally considered to have been rigged) only made the SDF appeal much stronger.

But the fortunes of the party have since dwindled 29 years on,  from 46 members of parliament in 1997 to only 18 members of the National Assembly in the 9th legislature voted in 2013.

Under very controversial circumstances, the SDF harvested 14 senators from the Adamawa and West Regions in 2013 out of the country's 100 pioneer senators. The electorate in the two regions were a CPDM majority that unfortunately suffered from the rejection of their lists.

In 2018, they narrowly secured seven senate seats in the North West region in an "election of bullets and ballots". In Bangem and Fontem, the SDF said running gun battles between the State Armed Forces and Armed Men frustrated the elections.

In the presidential elections that followed on October 7, 2018, SDF National Chairman Fru Ndi did not present his candidacy in favour of his Vice, Hon. Joshua Osih Nabangi.

The SDF got from these elections her worst results ever. Osih emerged fourth with 3.35% of 'validly cast votes'. Greenhorns like Professor Maurice Kamto and Cabral Libii emerge second and third behind President Paul Biya who officially swept over 71% of the votes.

The SDF has since failed to push for the resolution of the Anglophone crisis that broke out in 2016 despite holding parliament hostage and supporting populist positions. The political base of the SDF in the North West and South West Regions have since been swept away by a "senseless war" that has killed close to 2,000 persons and internally displaced about 500,000 with close to 50,000 others believed to be refugees.

Only recently, SDF National Chairman Ni John Fru Ndi was "kidnapped" by armed men fighting for the "restoration" of the independence of a country they call Ambazonia. Upon his release,  the SDF has since offered him to mediate between the parties in the crisis for a speedy return to normalcy.

"I held Biya's hands and told him that if he fails to act fast, the problems will slip under our fingers to uncontrollable levels, and here we are today," Fru Ndi laments.

At 29, the SDF is still battling to install the tenets of democracy including the rule of law, good electoral laws, an independent electoral commission and sweeping people-centered constitutional reforms.

Several anniversary rallies are expected to take place in all wards of the party across the country and in the diaspora.